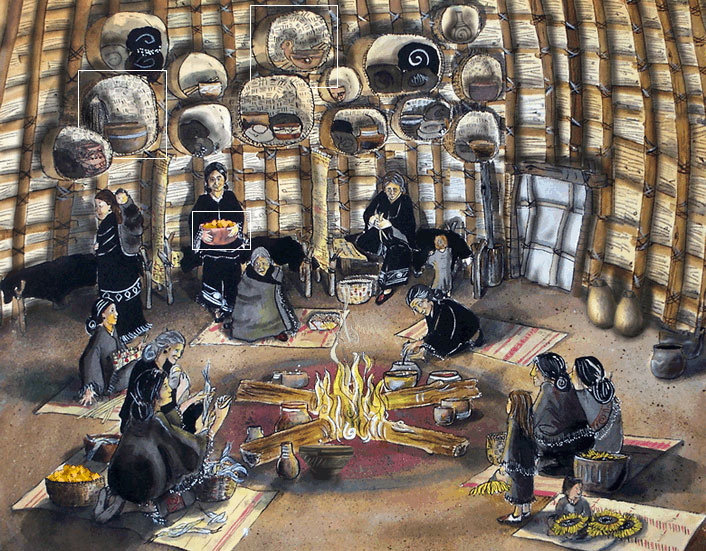 Step inside this snug and warm Caddo house. It's a cool, rainy autumn day, so the women have brought their work inside to be near the hearth fire. The children are playing while their mothers, aunts, and grandmothers prepare food and make pots, just as their ancestors did for hundreds and hundreds of years before. While they play, the children are watching and learning how to scrape the seeds from the centers of big, bright sunflowers to dry and use for food.

This is a fragment of an ancient mat found at a Caddo site in Louisiana. Click to enlarge it. Can you see the design that looks like a bird?

The children can practice weaving strips of cane into baskets or colorful mats. Do you see all the ways the Caddo people use the woven mats in their houses? Some are used as wall dividers between the beds, while others are scattered on the dirt floor to provide a dry place to sit.

Do you see the "closets" where Caddo families keep their belongings? Actually, there are no closets, only storage bins made of cane shelves that are hanging on the wall. Some contain extra clothing and blankets made of furry hide rolled into bundles. Others hold tools and extra pots. Some hold the families' most precious items, like the specially made pot that has a duck head perched on the side. Can you find it? Click on it to see a similar pot found by archeologists at a Caddo site.

Another pot in one of the wall bins looks like an ear of corn. Can you find it? It's hidden off to the left. Click on it and you will see a photo of the actual pot uncovered by archeologists in east Texas.

These are ears of what we call Indian corn. The first corn grown by the early Caddo would have had been smaller, with blue and rust-colored kernels, like these. The corn our farmers grow today is bigger and sweeter, but not as favorful or colorful—it's mostly yellow, although some is white.

One woman sitting next to the fire is pulling the shucks off ears of corn grown in the fields nearby. The Caddo eat some of the corn after it is freshly picked, in soups and stews, but they are careful to store plenty of it, dried on the cob, for food during the winter. Some corn is always dried and hung up high at the top of the house. It is kept there through winter to use the following spring. It is the seed for planting next year's crop!

Pole beans were grown by the Caddo.

Another woman is holding a bowl of golden persimmons. Do you see them? Click on them to see the real thing.

There are several clay pots on the fire. I wonder what's cooking for dinner? Perhaps it's a tasty stew of beans, squash, and corn flavored with a little deer meat or bear fat.

The beds look warm and cozy in this house. They are made of mats hung between four posts, kind of like a hammock. They are covered with furry blankets made of deer or buffalo hides. The fire is always kept burning, not only to cook food on and provide warmth, but as an important religious symbol, the gift of fire.

Painting at top of page by Christy Stallop for Texas Beyond History.